Under the auspices of the Frankfurt Book Fair, with Norway invited as Guest of Honour, Kunsthalle Schirn presented the first comprehensive exhibition featuring this Swedish-Norwegian artist (1894 – 1970), born Hannah Jönsson in Malmö. Several of her carpets had already been on display at Documenta in 2012, an honour granted to only a very few artists, and even fewer weaving artists.
Hannah Ryggen trained as a painter, but gave up the medium in favour of large-format figurative tapestries in 1923. Despite her previous training she never painted cartoons for her tapestries, but wove them without reference to a cartoon.

In the 1950s and 1960s she was very well known throughout Scandinavia, gaining fame beyond Norway where she moved in 1924 on account of her marriage to painter Hans Ryggen. After the artist’s death in 1970, her work was increasingly categorised as craft, but this does not do justice either to her conception of herself or to the art historical significance of her creations. Weaving allowed her to enter the arena of monumental art and to liberate herself from the condescending view of female artists’ paintings that prevailed at the time. She wanted to be free to deal with any topic, including political issues that were very close to her heart. One of her tapestries, exhibited in the Norwegian pavilion of the Paris World Exposition in1937, was even censored; “Etiopia” (1935) condemns the occupation of Ethiopia, but the part of the carpet which shows Mussolini’s head being pierced by an Ethiopian warrior was rolled up. The organisers feared that it might insult the Italian state power.

Hannah Ryggen depicted basic themes of being human and living in society: the horrors of war, abuse of power, our dependence on nature and our links with family and fellow humans. Many of her works deal with events and political debates that took place in Europe during the 1930s and 1940s, and which at the same time reflect the artist’s socialist beliefs. Living at her small farm on the west coast of Norway, where she bred her own sheep and produced her dyes from plants, she made her voice heard and continued to do so after World War Two, embracing subjects such as German rearmament, nuclear armament or the Vietnam War. In the present era, which is characterised by increasing inequality, nationalism and populism, her uncompromising work seems highly relevant, and the exhibition organisers perceive it as a call to stand up for the principles of humanism.

Hannah Ryggen is only now receiving truly international recognition. After Documenta in Kassel in 2012, her work was exhibited at the Malmö Museum of Contemporary Art in 2015; at the Oslo National Museum also in 2015, at Modern Art Oxford from 2017 to February 2018; and, finally, the Frankfurt retrospective reviewed here. After the rediscovery of Anni Albers, this is one of the positive results of the textile revival in art and that of textiles in general. 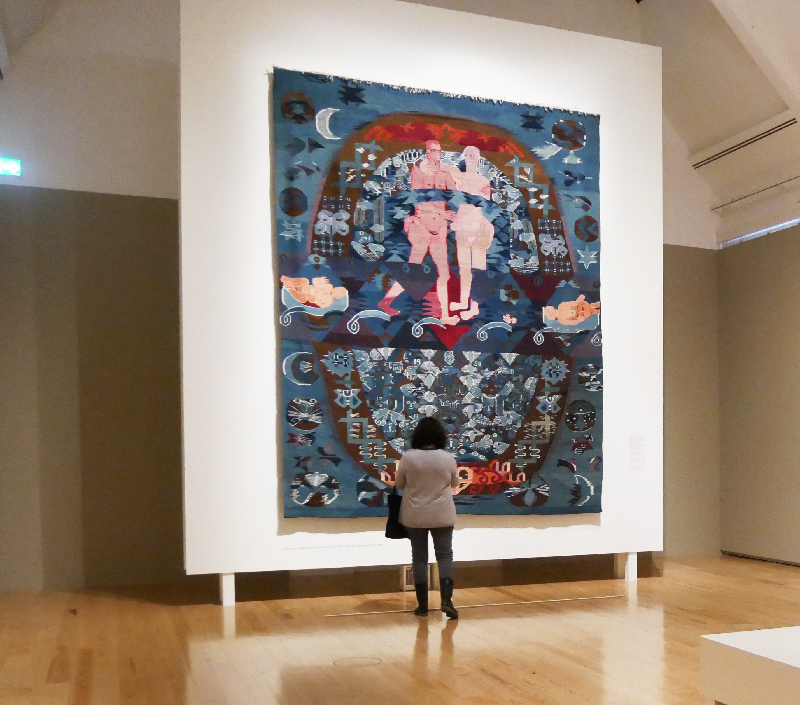 View at the exhibition “Hannah Ryggen- Woven Manifesto” with visitor in front of ” We Are Living On a Star”; photo Beatrijs Sterk