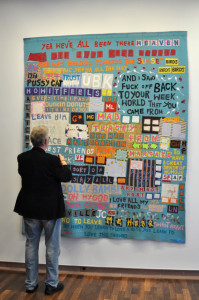 Exhibition form 17 November 2013 to 16 February 2014 at the Bielefeld Kunsthalle (Arthur-Ladebeck-Str., D-33602) ‘To open eyes’ refers to Josef Albers. The exhibition makers are aiming at opening visitors eyes for „ a material in the art, loaden with many prejudices…“ „Our exhibition is trying to overcome categories in order to find a Leitmotiv of the avantgarde of the 20th century. Works will be shown to put these categories and a hierarchy of categories into question“. In short another exhibition from last years series in Germany and Europe to the theme of art and textile. In this case the Bauhaus weaver Benita Koch-Otte was offering the impulse; she was the artistic leader of the weaving workshop in Bethel, later also working as art educator there. Bethel is very close to Bielefeld, the latter known as the town of linen. It is very positive to see so many textiles, e.g. round about 15 Wiener Werkstätte designers, a detailed documentation of the Amsterdam company Metz & Co with many works by Sonia Delaunay but also by Bart van der Lek and others. As German textile art achievements from after World War 2 Sofie Dawo and Marianne Meyer-Weißgerber are shown, the last mentioned only locally known. Not mentioned are the participants of the German Textile Art Biennials, starting in the 1970s. From the whole series of the Lausanne Biennale, only Sheila Hicks is represented but probably not even in that context. The choice of textile artists seems accidental and helpless, showing limited knowledge of the subject. More or less a second part of the exhibition is presenting artists who are using fabrics, threads or soft materials without a recognizable textile training, mainly male artists. Among 27 artists there are 8 women: Rosemarie Trockel, Andrea Zittel, Charline von Heyl, Ulla von Brandenburg, Aiko Tezuko, Tracey Emin, Friederike Feldmann and Frauke Eigen. Among the male artists are the usual suspects: Christo, Palermo, Warhol, Polke, Boetti and locally known artists like Friedrich Teepe. As much as the first group of female textile artists is shown with works that are over 50 years old (some artists already not alive anymore), the second group of non-textile artists is also showing younger works and artists, with Mark Barrow, born 1982, as the youngest. Is this an exhibition that lovers of textile art should see? Those who would like to see works by early designers & artists of the Wiener Werkstätte, the Bauhaus weaving workshop and the design of Metz & Co will be richly served. Those expecting to see an overview of textile art since that time will be disappointed. The exhibition makers are not even trying to discuss the steps of development during the time of the Lausanne Biennials or the newest Jacquard-weaving experiences, the importance of which they do not even seem to recognize. The industrial translation of Kiki Smith paintings into Jacquard weavings (where the artist did not interfere in the technique at all) is misunderstood as ‘textile art’. The influence of for example Japanese artists on contemporary art in the textile medium is not mentioned with one word. It seems very important to protect the textile arts against appropriation attempts by the art scene!(see also catalogue review)