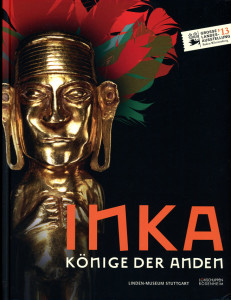 Doris Kurella and Inés de Castro (editors); Linden-Museum Stuttgart/Lokschuppen Rosenheim, 2013, ISBN 978-3-8053-4657-3; 346 pages, many colour and black & white illustrations, text in German. The accompanying book to the eponymous exhibition at the Linden-Museum Stuttgart and at the Exhibition Centre Lokschuppen in Rosenheim is composed in two parts; a catalogue of 200 pages and a very informative anthology on the Andes cultures, that are here subsumed under the notion of the Inca Empire. Unfortunately this two-years project with exhibition, book and press information is based on the mistaken presumption that this would be the first covering of this theme in Europe. Only in autumn 2010 in Rotterdam and earlier in the 1980s in the Hildesheim Roemer- und Pelizäus-Museum there has been major exhibitions to this theme. An ignorant and impudent advertising had enticed the museums director and the Mayor of Rosenheim (in his welcoming address) to fool themselves and the writing press for this exhibition. It is also questionable to subsume the development of the round about 4,000 years old Andes culture with its many peoples, situated between today’s Quito in Ecuador and today’s Santiago in Chile under the Inca Empire. Instead the Inca were epigones and heirs of these cultures and long before the arrival of the Spanish endeavoured to suppress recollection of the cultures they dominated, projecting the idea that the knowledge and skills they had largely inherited were their own. How they succeeded to do so, what strategies they used and how they finally did get politically entangled, in addition to the role played by the Spanish when they conquered the Inca Empire, is described in this book in a brilliant way, making use of the newest research results
From 3. to 6. March an international Symposium “New Perspectives on the Andes” will take place with scientists from the USA, Peru and Germany.The newest scientific results of research on the Inca culture are in the focus of this Symposium. Registration at the Linden-Museum, Stuttgart