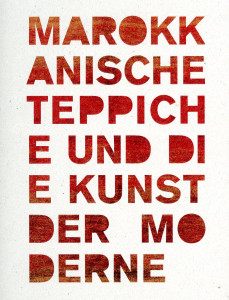 Florian Hufnagel and Jürgen Adam (editors); Arnoldsche Art Publishers, Stuttgart 2013, ISBN 978-3-89790-9; 440 pages, 700 colour illustrations, text German and English. This book with catalogue of the exhibition with the same name at the International Design Museum in Munich was published with an introduction by Florian Hufnagel. Presented are rugs from the collection of the architect Prof. Jürgen Adam, a friend of Morocco and an expert on its art and architecture. In this article „Magiciennes de la laine – Moroccan Carpets and Twentieth – Century painting“ he explains his fascination for these rugs that he sees as connected to the country Morocco; the influences that this country had on European modernity, on painting, materials and techniques as also on symbols.He writes: „Moroccan textiles are prime art objects that have enriched the world cultural heritage of modern times by making a substantive contribution to the dialogue between the world’s cultures. Linking prehistory write the present, Moroccan carpets have ties with twentieth-century painting in Europe and the United States.“ the influence of the female Muslim weavers on the design of their work is described as follows: „They were quite often woven and knotted narratives telling of the joy, cares and sorrows of women who had no written characters at they disposal for their stories.“ The catalogue is showing a wealth of glossy photos and is going into detail on the design elements point, line, area and its combinations. It should be mentioned that, except for the English text, there also in a summary in French, opening up this book for a rider readership.