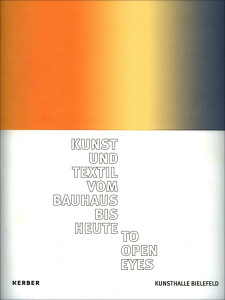 Friedrich Meschede and Jutta Hülsewig-Johnen (editors); Publisher: Kerber Verlag, Bielefeld, 2013, ISBN 978-3-86678-919-7; 231 pages, 222 colour and 50 black & white illustrations, German Text. This accompanying book to the exhibition with the same name is more than a catalogue showing the works exposed as it also offers a series of interesting articles, e.g. „Riches and Ornaments, Fabrics of the Wiener Werkstätte“ by Nils Dorén, „Metz & co, De Stijl and Sonia Delaunay“ by Matteo de Leeuw de Monti, an article on the Bauhaus women-weaving-workshop by Christian Wolfsdorff as also a wonderful contribution on a Jacquard-weaving by Gunter Stölzl by Jeroen Vinken, a textile designer and Jacquard artist himself. A homage to Benita Koch-Otte is than followed by a contribution on textile art “from applied art to autonomous art in the 1950s till 1970s” by Henrike Mund, unfortunately without a clear overview. Missing here are the influence and importance of the Lausanne Biennials, initiated by Jean Lurçat, with the renewals of American, East-European and Japanese artists like e.g. Masakazu Kobayashi. Instead German textile art is in focus with Peter & Ritzi Jacobi, Brunhild & Hamdi El Attar, Inge Vahle and Sofie Dawo. In reality the Germans contributed rather late with their textile biennials (1978-1990) and has not been influential on an international level. The final contribution by Friedrich Meschede, director of the Bielefeld Kunsthalle where the exhibition is shown, together with Christina Lehnert to the themes of “Images emerging out of fabrics” (“Stoffe, aus denen Bilder entstehen”) is mirroring an art historian view: “It is only in the space of art that this material is able to display its intrinsic aesthetic values. That is what the exhibition wants to open visitors eyes for” – the fact that textile is not a material, just because artists use it as material without recognizing its specific modalities of creation, is at the core of the misunderstanding of the art advocates and is trivialising the way of viewing the medium. But this book review cannot be the platform for further details that we will come back to later.