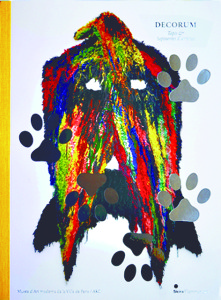 This is the catalogue of an eponymous exhibition held at the above-mentioned Paris museum. We should not judge books by the blurb printed on the cover, but the promotional text for the exhibition on the cover of this book mentions 20 artists who have supposedly created woven masterpieces (chefs-oeuvre tissés d’artistes) although at least half of them have only studied art, sculpture or graphic art. The names include US artist Pae White who occasionally commissions industrial companies to produce jacquard versions of her designs. These ideas of art undermine the credibility of the entire undertaking, i.e. the exhibition and accompanying publication on this textile theme! Have we come to ignore the specific nature of textiles during the course of the 20th century, or are art historians of a conservative bent – the people usually in charge of exhibitions at art museums – the only ones who have remained ignorant? In their own words, those responsible hope to contribute to an appreciation of a creative approach that inspires many artists, and to offer something like a tool for a fuller grasp of the art of tapestry from a technical, historic and artistic perspective. Obviously this allows them to include contributions presenting work by non-textile artists who only appear to be close to the textile field. By limiting the subject to carpets and tapestries, the authors have avoided the risk of losing themselves and the objects in overly general art opinions, as we saw in the case of the Wolfsburg exhibition concept. In the illustrated section, the “Decorum” catalogue presents a highly interesting succession of objects from 1880 to date. In the text section, several authors have been co-opted to delve into the textile arts, the influences of early cultures on these (Coptic, pre-Columbian, Persian, Amerindian and Tibetan examples) and to pick up on issues relating to (the arts and) crafts and Oriental carpet weaving. Anyone interested in the theme of art & textile will find that this book (in French) and the publication accompanying the Wolfsburg exhibition (in German or English) offer two diverging positions, each highly diverse and controversial, which will provide food for thought for a long time to come. One of the questions they raise is why discussions on the relationship between art and textile are taking place simultaneously in several countries at this particular time.