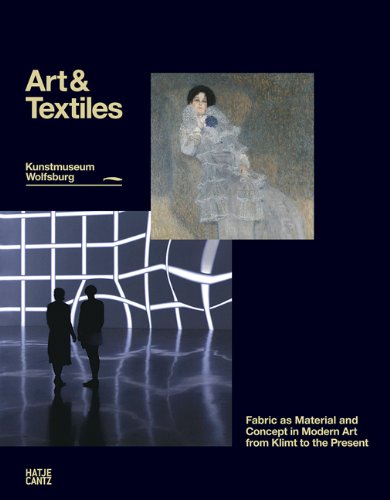 Three years in the making, this book was published for an eponymous exhibition held at Kunstmuseum Wolfsburg and is presented as an equivalent to the exhibition, “Ornament – Perspectives on Modernism” held at the same museum in 2001. Led by its director, Markus Brüderlin, the museum team consisted of art historians unrelated to textiles either in their education or their practice. They are proud to have prepared a standard work on the subject involving 14 authors, including Beverly Gordon who does draw on her textile repertoire, but has not been involved in the concept for the exhibition and publication. We take our hats off to the team for the assiduity they display in their research. They did not intend to discuss art history from Art Nouveau to the present, nor to provide an overview of the textile arts during that period; rather they have used a multitude of cross-references between paintings and objects produced by other cultures to create configurations of thought that allow them to trace the influence of textiles on what they perceive to be ‘modern art’. Drawing on Austrian art historian Alois Riegl (1858 – 1905) and architect Gottfried Semper (1803 – 1879), the authors attempt to slot textiles into this context, notwithstanding the fact that they are usually considered a craft, women’s stuff and female domestic work. The ‘spider women’, Bourgeois, Trockel, Hatoum and Amer, have been co-opted to help them overcome this prejudice – women who have slipped into ‘modern art’ and taught them that it is no longer possible to think along those lines. Although they give space to Lenore Tawney, they prefer to put their trust in Rosemarie Trockel who has been playing to the grandstand for years, supported by her gallery manager. The Kunstmuseum Wolfsburg wants its work to be perceived as an exploration of the meaning of textiles as well as a ‘rereading’ of the history of modern art, from Art Nouveau to the present. Readers who mistrust the apologists of ‘modern art’ – those who focus on a partial aspect of the fine arts and who disregard the art of making a physical object, measuring only the ‘spiritual’ content of a piece – will not believe that the authors are able to grasp the textile medium, in which the utilitarian is intrinsically linked to its very existence, similar to the products of architecture and agriculture. We hear that museum staff fear that their profession risks losing its interpretative high ground on account of the multitude of opinions available on the internet. We should hope to be spared the interpretative high ground!