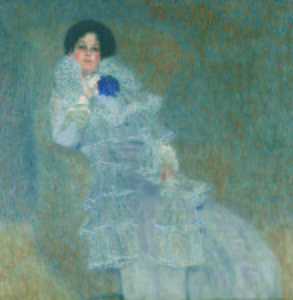 Subtitled ‘Fabric as Material and Concept in Modern Art from Klimt to the Present’, this major exhibition is on view at the Kunstmuseum Wolfsburg (Hollerpl. 1, D-38440) from 12th October 2013 to 2nd March 2014. Featuring some 200 pieces by 80 artists as well as work by a further 60 anonymous artists from all over the world, its scale is similar to the Paris “Decorum” exhibition, and it covers almost the same period and subject matter. A further common feature shared by both events is that each has been conceived by art scholars, although their cultural backgrounds are somewhat different. Whereas the French curator is closer to the tapestry tradition and his exhibition concept pays a great deal of attention to the Lausanne Tapestry Triennials, Wolfsburg appears to focus more comprehensively on the influence of textiles on modern art.

Attracting 3,000 visitors from all over the world on its opening day, the “Art & Textiles” exhibition is divided into 11 chapters: 1) Art Nouveau and the interrelation of art and craftsmanship; 2) Weaving and design before and during the Bauhaus period; 3) The 1950s and the present: The informal and the birth of textile art; 4) – 6) The 1960s and 1970s: Felt/Fluxus/Anti-Form; Soft Art and Arte Povere, Minimal Art and Postminimalism; 7) Between Cultures: Africa, America, Asia, the Orient and the Occident; 8) Spider Women: Bourgeois/Trockel/Hartoum/Amer; 9) Fabrics between mind and matter; 10) ArchiTextiles: The clothed wall from the Middle Ages to the present and 11) From mummies’ nets to the World Wide Web. Both exhibitions emphasise that they intend to break with the preconception that textiles are the domain of the feminine, anachronistic, primitive and industrial, highlighting instead their lively and sensual aspects – features that are in danger of disappearing in age of computers. Although stating a common aim, the two exhibitions seem to show a lack of a shared repertoire of experience. In both cases, the exhibition producers are insufficiently familiar with the field of textile arts, and both have applied the inadequate yardstick of conservative art scholarship. This is borne out by the fact that with a total of 110 artists featured in Paris, and a further 80 in Wolfsburg, only 7 artists are represented in both shows: Anni Albers, Sonia Delaunay, Sophie Taeuber-Arp, Magdalena Abakanowicz, Alighiero Boetti, Rosemarie Trockel and Pae White. Researched with great attention to detail and elaborately installed, the Wolfsburg exhibition is presented as a comprehensive project providing insights into the influence of textiles on modern art, beginning with Art Nouveau; it could be recommended to a wider public as an introduction to the subject of art and textiles if it were only defined by a fuller appreciation of the textile medium (see catalogue review). In slightly reduced form, the exhibition will be repeated at the Stuttgart Staatsgalerie (Konrad-Adenauer-Str. 30-32, D-70173) from 21st March to 22nd June 2014.