Poland
The greatest national contribution is certainly that of Polish artist Malgorzata Mirga-Tas who has created an impressive textile manifesto of Roma identity and art. A Romani herself, she drew her inspiration from the astrological frescoes in the Palazzo Schifanoia in Ferrara. The entire Polish pavilion was transformed into a “picture palace”, an installation of 12 large-format textile pictures – referring to the 12 calendar months – depicting images from the Roma culture. After all, they constitute the largest European minority.
The top row of images tells the story of the Roma’s mythological journey to Europe; the middle row shows Roma stories combining real women with magic and astrology; the bottom row depicts everyday life in the artist’s place of residence, Czarna Góra and other Roma settlements in the Tatra Mountains.
This work was apparently created on site within a few months, in collaboration with colleagues, using textile fragments from clothes belonging to the artist’s family and friends.
Similar to a fresco, this rapidly created work resulted in a fresh expression of the textile images which, despite their high standard, never deny the everyday.
The title of the work ,”Re-enchanting the World”, refers to the revival of a peaceful community or a transnational culture. 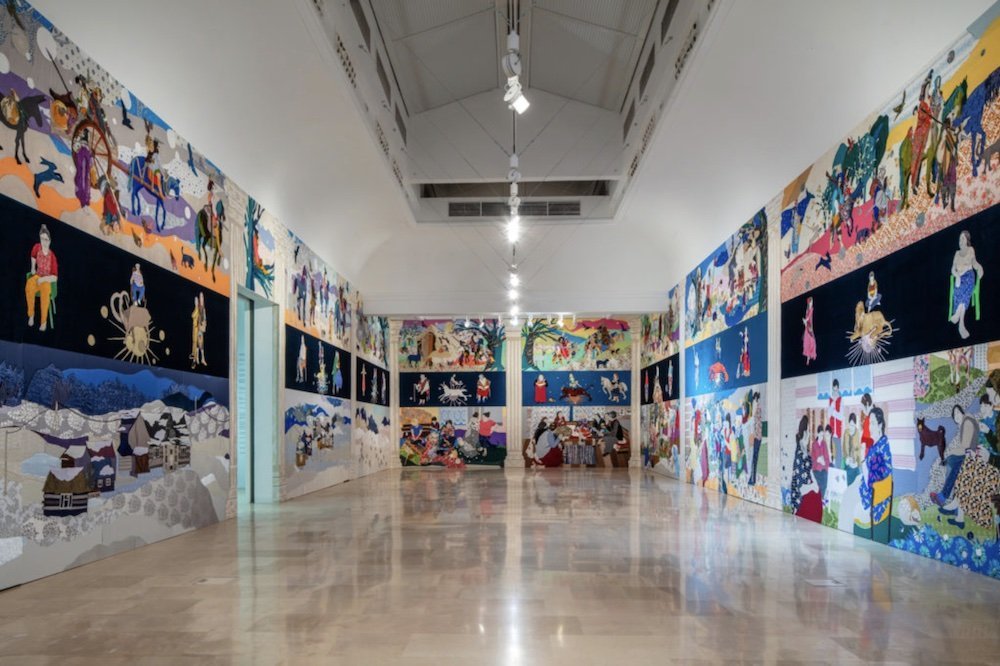 The Sami Pavilion
This is the second place I loved! For the first time, the beautiful pavilion representing the Nordic countries (Finland, Norway and Sweden) has been  renamed the Sami Pavilion. The works of three Sami artists are on display, among which I was particularly interested in those by Máret Ánne Sara. She makes textile installations using the sinews of reindeer that reflect the smell of these animals by means of non-verbal communication. In another work she mourns the loss of many animals due to government regulations and climate change.

Denmark
The Danish Pavilion presents two installations featuring centaurs by artist Uffe Isolotto, entitled ‘We Walked the Earth’. It’s not really textiles, and certainly nothing happy, but it’s done so well that it really takes your breath away. Isolotto sees her characters as mixed creatures, as symbols from a post-human world: “They try to survive in a world where being human is no longer enough.” 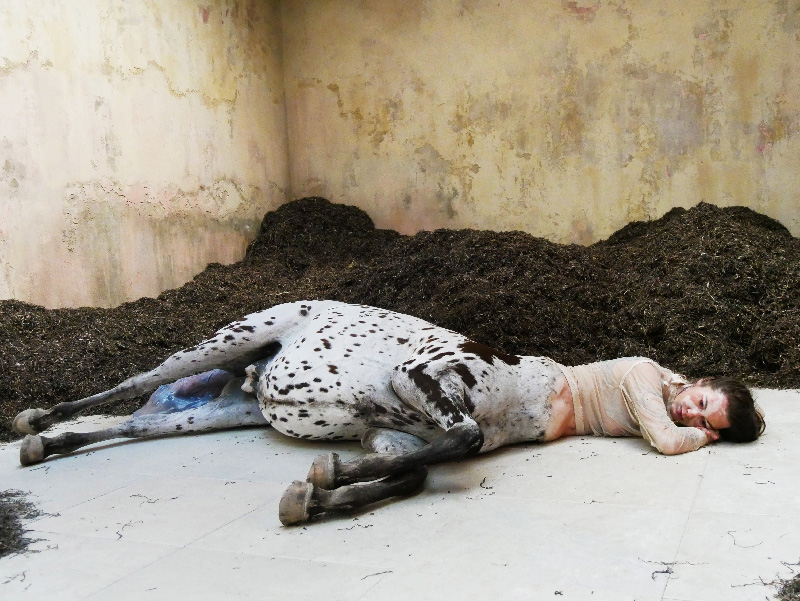 United States
The USA is showcasing work by a black artist, Simone Leigh. Covered in straw mats like an African hut, the pavilion became an “African palace of the 1930s”. The artist’s largely non-textile sculptures are very impressive. This year Simone Leigh received the Golden Lion for her work. 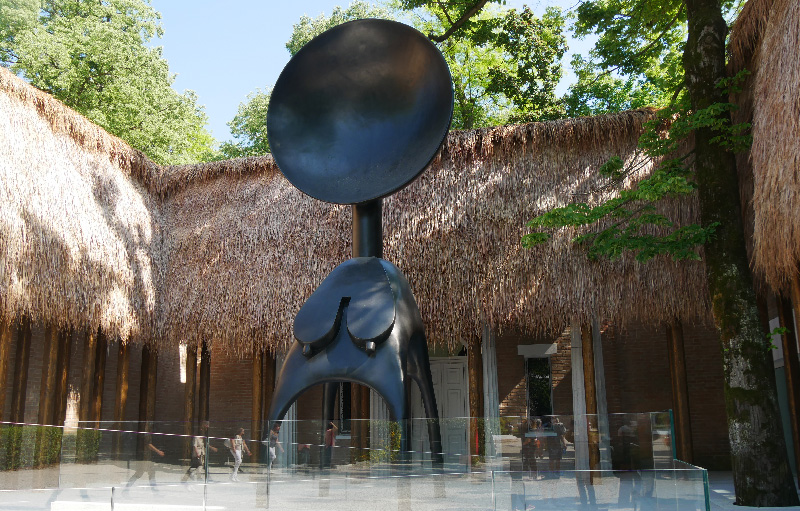 Venezuela
In this pavilion, I was surprised by the naïve painter Palmira Correa who paints very colourful figures that you simply have to like. I also found her work highly stimulating for my textile-oriented readership because she uses principles like repetition of forms, colour contrasts etc. that are also seen in textile design

MexicoThis pavilion was very disappointing; the artists were hoping to “show alternative perspectives and a decolonised future”. As a viewer, I was happy to see some weavings on show, but I did not understand their purpose and why one could not learn more about it.

PhilippinesIn this pavilion, too, a performance had been created by means of textiles and sound, although unfortunately nothing could be learned about the textiles (ikats). This left one with the impression that they were just an unimportant accessory.

KyrgyzstanThis pavilion shows the textile installation “Gates of Turan” by the Iranian artist Firuz Farman Farmayan in which many Kyrgyz artists were involved. However, these are not mentioned, and this has led to a scandal in Kyrgyzstan.

The “SILK” exhibition, organised by the Goethe Institute in the Caucasus and the Guidecca Art District, included several impressive textile works by Faig Ahmed, who is known for his transformation of decorative handicrafts (now by no means novel), and by artist Nino Kvrivisvili who is well-known in Germany, and whose beautiful minimalist tapestries feature the Georgian silk industry. Lisa Battachi’s handwoven rugs are part of her “Sand Storms in Medio Mundi” project, which is about waiting for a new world view that may replace today’s ideology of progress. Araks Sahakyan knotted a rug entitled “All Windows of my Home” that did not impress me greatly, but knotted rugs almost always look good.
Ewa Kuryluk’s exhibition “White Kangaroo” at the Palazzo Querini on Dorsoduro gave me the opportunity to finally see work by this artist in real life. A loud video interview with her was running at that point, and her voice really got on my nerves. That was my first irritation, and there were more to follow (I didn’t really like her coloured pictures). Still, I do like her intimate drawings on fabric that express eroticism, sadness and memories.

Marie Bergstedt’s work, “Ladies in Lab Coats”, is on show at the European Cultural Foundation in the Palazzo Mora. This work pays homage to the scientific contributions made by women over the centuries. I already knew the piece from Madrid, where it was on display during the World Textile Art meeting in 2019. In Venice, this important work is presented to a larger audience.