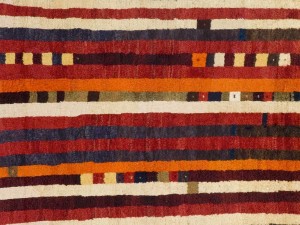 This exhibition that is taking place from 14 September 2013 to 5 January 2014 at the Pinakothek of the International Design Museum in Munich is focusing on the collection of the Munich architect Prof. Jürgen Adam consisting of about 400 Berber carpets. Museum director Florian Hufnagel sees this exhibition after the re-opening of his museum as a signpost of an overarching theme, that is the confrontation with the Muslim-influenced culture of North Africa and the carpets of Morocco leading to the roots of the art of the European avantgarde, as he suggests.In the currently fashionable attitude he remarks that textiles have been excluded for a long time when looking at the sources of inspiration of modern art. He recalls that already Paul Klee travelled to Tunis in 1914 and that Matisse stayed in Algeria and Morocco. During that time Paul Klee is believed to have painted the „Carpet of Memory“, taking inspiration from Berber carpets. In this context also names like van Gogh, Le Corbusier and the Wiener Werkstätte are mentioned – of all workshops the last mentioned, where about a dozen women has been working and that was therefore criticized as „Wiener Weiberkunstgewerbe“ (Viennese women craft)! The same is known about the Bauhaus weaving workshop after World wWar 1, where all the female Bauhaus students were put together. The spectre of woman! Still working today… This exhibition is now gone (www.pinakothek.de). The book with the same name is furthermore available with German and English texts and a summary in French, together with a catalogue part illustrated with beautiful coloured illustrations.