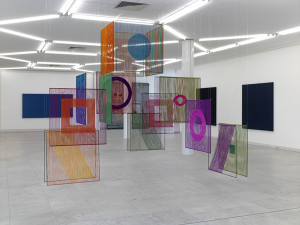 The Museum Abteiberg of  Mönchengladbach hds caused a special kind of confusion by presenting this exhibition, on view on its premises from 23rd June to 10th November 2013. The list of participants includes names such as Anni Albers, Lenore Tawney, Magdalena Abakanowicz, Jagoda Buic, Sheila Hicks and further artists from the era of the Lausanne Biennials, among them many Dutch; however, it also mentions Paul Klee, Johannes Itten and younger artists who employ textile materials, for instance Rosemarie Trockel.

‘Textiles: Open Letter’ is a project by Rike Frank, a curator living in Leipzig, in conjunction with Grant Watson (London), Sabeth Buchmann (Vienna) and Leire Vergara (Bilbao), funded by the Allianz Kulturstiftung (Cultural Foundation) and the Kulturstiftung des Freistaates Sachsen (Cultural Foundation of the Free State of Saxony). In a series of talks, exhibitions, seminars and further presentations, the organisers attempted to determine the current significance of textiles in contemporary art. This required them to hold eight meetings in London, Vienna, Leipzig and Bilbao within 18 months, culminating in the major Mönchengladbach exhibition that has left the public at a loss. Neither the members of the project group nor the Museum Abteiberg have ever come to the fore in textile art. However, art scholars and official cultural organisations have always known how to pull funding by tabling interesting-sounding project proposals. The Mönchengladbach event was co-funded by the Kunststiftung NRW (Art Foundation of North Rhine-Westphalia) and the Dutch Mondriaan Fund. When the exhibition is shown in Vienna in 2014 as planned, the Generali Foundation will provide exhibition space and funding. What, then, is the nature of the confusion caused by the Mönchengladbach exhibition? Viewers begin by watching a film recalling several pieces presented at the former Lausanne shows; next they are guided into a room filled with old classics, for instance work by Tawney, Abakanowicz, Buic etc. At the exit, showcases present documents from Holland, a European region where a highly innovative climate prevailed in textile art, in parallel with the Lausanne Biennials (is this a tribute required by the Mondriaan Fund?). Why does the show ignore the situation in Poland, where the climate was similarly productive? The accompanying writings published for the exhibition – a collection of ramblings on art – explain the idea of ‘Open Letter’ by quoting a 1958 text written by Anni Albers, in which she supposedly reveals that during all her work as an artist and teacher, she sought a closeness to fine art and the historic predecessors of an abstract language resembling the one she had discovered in pre-Columbian textiles. The text claims that she was driven by the same motivation as the project participants, intending to establish weaving as an artistic medium (?). This key source appears neither in the accompanying text nor the exhibition! A  number of textile artists active during that period of departure drew their inspiration from pre-Columbian textiles, yet none are included in the exhibition, which instead presents a few Coptic fragments from the museum holdings… The text then states: “The exhibition also shows the many varied ways in which history of Minimal and Conceptual art movements that shaped the Museum Abteiberg collection, have been influenced by textile materials and processes and by implication the extent to which textiles have been excluded from a discussion of the canon; often because of their utilitarian, gendered and déclassé connotations.” This reference explains why the “Textiles: Open Letter” exhibition section flows seamlessly into a presentation of museum exhibits dating from the 1920s to the present. (Do we owe this smooth transition to the North-Rhine Westphalian Art Foundation?) Sadly, one derives the impression that a rather exciting subject offering some highly interesting items in both the text and presentation, has been sacrificed to a gamut of sponsors’ requirements – an upsetting idea! (http://www.museum-abteiberg.de)