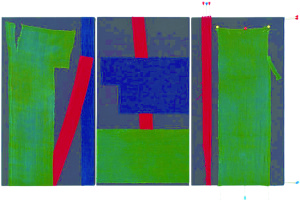 Subtitled “Material/Materie” (Material/Matter), this is the 2013 theme of the ‘basement’ exhibition space in Vienna. The organisers have posed the question, “What is the fabric that art is made of?”, reflecting on it through various artists’ perspectives. The first exhibition featured clothing by Christiane Spatt/A and Judith Sturm/D from 13th to 28th April 2013, and a second show of textile art and installations by Ina Loitzl/A and Yvonne Kendall/D followed from 25th May to 9th June 2013.

Later a show of work by Uwe Hauenfels/A and René Fehr-Biscioni/CH was shown from 13th to 29th September 2013 and, finally, an exhibition of Austrian ‘basement’ artists scheduled from 23rd November to 8th December 2013, featuring  Barbara Graf, Karin Binder, Helga Cmelka, Uli Fischer/D, Katarina Schmidt, Hazem El Mestikawy and Susanne Thiemann/D. In their reflections, the artists were supposed to focus on exploring and understanding the nature of fabric (materials/matter) in art and in the relationship between space and form. (http://www.basement-wien.at)