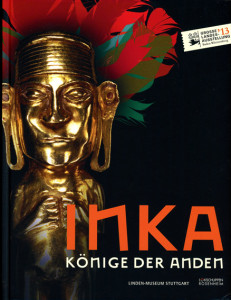 This important exhibition at the Linden-Museum Stuttgart (Hegelpl. 1, D-70174) is taking place from 12 Oct. 2013 to 16 March 2014. This exhibition is said to be the first in Europe to be held entirely on the Inca ignoring both a major exhibition of many years ago at the Roemer & Pelizaeus Museum in Hildesheim/D as also the „Inca’s Capac Hucha“ exhibition shown in autumn 2010 at the Wereldmuseum in Rotterdam, also presenting the cultures of the Inca Empire. The exhibition in Stuttgart is showing objects from museum lenders in Peru, London, Madrid, Berlin, Munich, Hamburg, Basel, Göteborg, Antwerpen as also from their own and other public and private collections. The objects, a. o. textiles, are throwing light on the religion, architecture, economy and political power of the Inca empire (www.lindenmuseum.de) Afterwards the exhibition will be presented at Lokschuppen-Rosenheim from 11 April until 23 November 2014 (www.lokschuppen.de). The exhibition is accompanied by a catalogue in German language.

Hint 1: The catalogue of the Dutch exhibition „Incas – Capac Hucha“ is available at reduced price via the Textile-Forum- book list!
Hint2 : Issue 2/2009 of TEXTILE FORUM magazine was devoted to Iberoamerica, with information about historic and contemporary textile cultural items in Latin America.
Hint 3: Issue 4/2010 of TEXTILE FORUM magazine included 10 pages with information about historical and contemporary themes in Latin America.