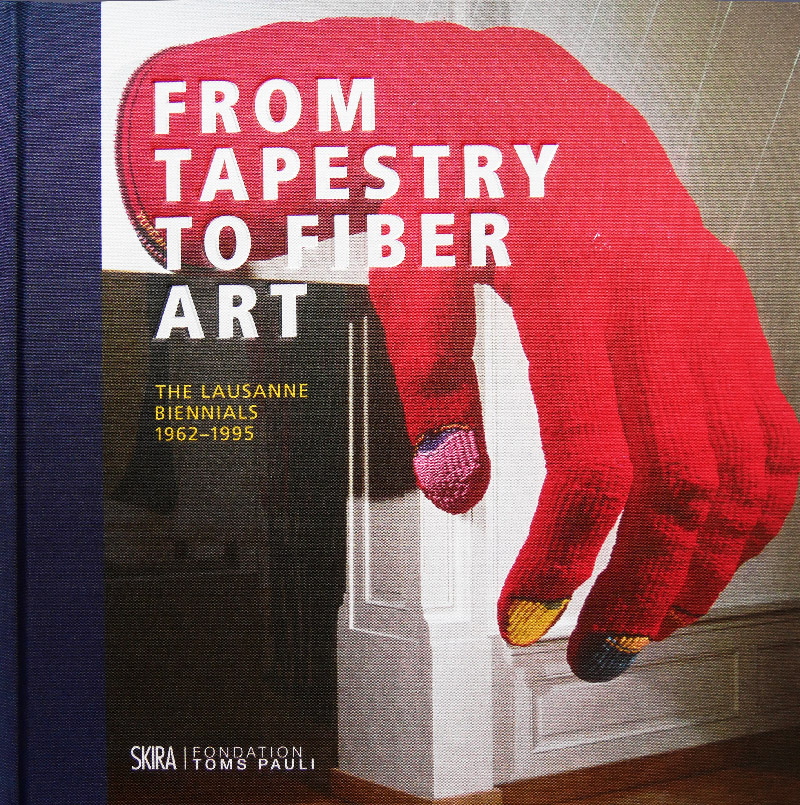 From Tapestry to Fiber Art – The Lausanne Biennials 1962 – 1995
Giselle Eberhard Cotton, Magali Junet; Skira, Milan / Fondation Toms Pauli, Lausanne, 2017, 223 pages, 68 black & white and 253 colour illustrations;English edition ISBN 978-89-572-3471-6; Euro 55,-, 60 US Dollar ; French edition ISBN 978-88-572-3472-4
This long-awaited book has been produced with a great deal of care. The result is a highly comprehensive publication on anything related to the famous Lausanne Biennials: their beginnings as a revival of classic wall tapestry and cartoon painting initiated by Jean Lurçat, and their transformation – almost from the outset – into a real revolution of the textile arts. Weavers from the East (especially Poland) entered the stage and were the first driving forces of this movement of renewal. However, American weavers also participated in this remarkable revolution. Less deeply rooted in traditional tapestry than Europeans, they drew inspiration from the early weavings of their own continent (e.g. Peru and Mexico). Finally, during the 1980s Japanese textile artists added to the renewal, inspired by their centuries-old dyeing and weaving techniques.
Possibly with the exception of Jean Lurçat who was not happy with the development, the organisers were very open-minded curators and art critics, but while they encouraged the revolution, they were divided as to the course it should take. The lack of a clear direction apparent from the early 1980s was one of the serious problems leading to the end of the Biennials in 1995.

The book opens with a highly readable article by Janis Jefferies providing a general overview. She places textile art in the wider context of art: “The importance of this recurrent event was to position textile art within an expanded view of art history and to ground it socially, aesthetically, architecturally”. She perceives a connection to the renewed interest in textiles currently shown by the fine art scene: “The majority of art critics are acknowledging what artists have always known, that textile materiality with all its gravity, responsiveness and connection to life and loss holds tremendous capacity to speak about issues of our human condition”. In her conclusion she states that “Lausanne played the midwife to a critical redefinition of tapestry and textile art claiming space within an expanded field of visual arts.”

The major part of the book is dedicated to the history of the Lausanne Biennials from the organisers’ perspective. Covering a long period of time, this section has been written with much attention to detail. I am particularly impressed with the precision and honesty of the two writers, Giselle Eberhard Cotton and Magali Junet. They provide many new facts previously unknown to me which have changed my ideas about the Biennials. In the past, I had always been one of the journalists ready to criticise those aspects we did not understand or with which we disagreed. Reading the whole story from a historical viewpoint was as exciting as a thriller and gave me much food for thought.
The titles of the chapters indicate what readers can expect:
— Lausanne International Centre of Tapestry
— Tradition and Revival 1962 – 1967
— Is This Still Tapestry?
— The Impact of the Biennials
— The Price of Success 1977 – 1981
— The Changing Map of Textile Art 1983 – 1987
— The Biennials in Crisis 1989 – 1995
— Nouvelle Tapisserie, New Paradigms

Four further authors, each a textile art expert in her own country, provide insights into the ways in which the Lausanne Biennials gained importance in their respective countries. France is covered by Odile Contamin (The Cartoon Painter and Tradition); Poland, by Marta Kovalewska (Mapping New Meaning); the United States, by Jenelle Porter (The Fiber Art Pioneers); and finally Japan, by Keiko Kawashima (Powerful Harmony). Each of these contributions contained points of view I had not seen as clearly expressed before, and so I was reading the book with growing enthusiasm.
Seeing that the publication is easy to read even for non-native speakers of English, I would like to encourage every textile artist and all those interested in textile art to get hold of a copy as it could well sell out soon. www.toms-pauli.ch/de/les-biennales/buch/