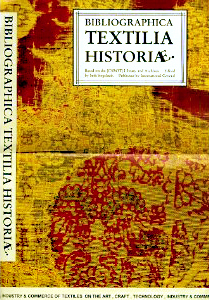 Seth Siegelaub; International General, New York/Amsterdam 1997; 415 pp., 35 illustrations, English text –
17 years ago this bibliography was published in an atmosphere of relative indifference from the part of the public. Since 2012 after the exhibition “Stuff Matters” with historic textiles from the collection of the author (who died in 2013) at Raven Row in London, a precursor of the current glut with textile objects in art exhibitions, his bibliography received deserved attention. I wrote at the time:
This astonishing new bibliography takes into account all facets of textile literature. It lists more than 5000 books, essays, dissertations, legal texts etc. from all over the world, dating from the late 15th century to the present. Here we encounter references to publications on flat-woven carpets, textile printing, embroidery, lace, tapestry and rugs as well as fibre technology, dyeing, pattern books and costume studies.
The author compiled his collection of titles with the intention of making textile literature accessible in the fields of art, craft art and technology, and facilitating research into the importance attached to textiles in so-called primitive societies, Antiquity, the Middle Ages and Renaissance up to the time of industrialisation. Thus the bibliography also considers the economic and social aspects of textile production.
In his introduction, Siegelaub remarks that he knows of no compilation of publications that unites all textile aspects. This task now appears to have been tackled, for the first time, by the CSROT (Center for Social Research on Old Textiles) Foundation that was established in 1986. At any rate, the library run by that private Amsterdam-based foundation owns many of the titles listed here. In addition, the author worked very closely with the libraries of the Amsterdam Rijksmuseum, the Victoria & Albert Museum, London, and the Pompidou Centre, Paris. He completed his compilation with in-depth research on the Internet.
When talking to him over the telephone, Seth Siegelaub explained that his long-term plan is to publish an atlas of textile history. He calls this book ‘First General Bibliography’ and hopes that its publication will help him find further interested parties who share his view of the subject and wish to cooperate with him. In this context he kept emphasising the necessity of keeping the relationship between economically, socially and culturally biased publications in mind; this will throw light on the working conditions and technological developments encountered through the ages, specifically in the period between the Middle Ages and the present.
A second volume containing classified titles in five chapters is to be published by the millenium. Moreover, the CSROT library is to be opened to the public. Currently it merely maintains a copying and film service. Originally specialising in Oriental carpets, the library only moved from New York to Amsterdam in the late Eighties. This might be the reason why it has not come to my attention before now, despite the fact that I look back on nearly twenty years in the publishing business.
When reading the introduction to the book, many readers will find their own experiences confirmed. Siegelaub was obliged to see for himself that the heritage of textile literature is usually looked after by arch-conservatives. He believes that history provides an explanation for this phenomenon: Textile historiography was long dominated by the church, and later had a partly commercial bias (the first museums of applied art were ‘treasure troves’, or pattern collections intended for production). Scientific care was in the hands of the European upper classes, and precedence was given to the historiography of silk. Roughly speaking, interest in textiles was nurtured from three sources, 1) the historiography of silk in civilisation as the dominant theme; 2) archaeology; and 3) ethnography. Only the latter source resulted in a certain interest for underprivileged, so-called every-days, culture.
To date textile historiography suffers from a fragmentation into fields of interest that are cut off from each other. Thus the work done by the author and the CSROT Foundation is all the more worthy of our attention and support. This publication should be available on the shelves of every scientific library.
Note
The book was mentioned in the journal TEXTILE FORUM 4/97 (page 46).
Note: More about the book on the website of Egress Foundation